Rolls-Royce is using the elebia automatic crane hook during lifting and rigging operations at its Seletar Assembly and Test Unit (SATU) in Singapore. It is at this facility where Trent aero engines are assembled and tested.

The facility, which completes assembly of large engines primarily for aircrafts, has recently taken delivery of its second evo10 crane hook and is already considering placing orders for additional units.

The hooks work with overhead cranes to lift modules and aero engines. Trent engine modules weigh between 1t and 2t, while a complete engine is 5t. Heavy tooling is also incorporated into many lifts, weighing between 25kg and 50kg.

The state-of-the-art facility is designed to allow simultaneous assembly and testing of Rolls-Royce Trent 900 and Trent 1000 aero engines. At full capacity SATU can produce up to 250 engines per year. The Trent 900 aero engine was developed for the Airbus A380 family and delivers the lowest lifetime fuel burn in addition to its excellent environmental attributes. The Trent 900 has been selected by 11 of the 17 airlines who operate the aircraft. 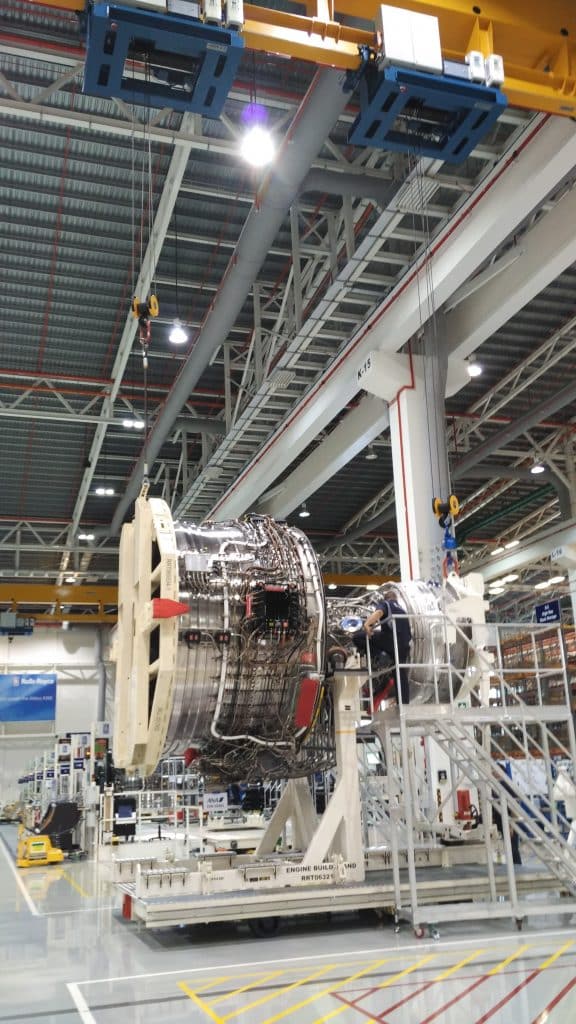 …”The elebia hooks are simple to use and keep crane operators and those responsible for rigging at a safe distance when connecting modules and engines to lifting equipment. Previously, when we joined the engine core to the fan case, our crane hoist was locked away for two days until the engine could be rotated to a horizontal position. Now, with the elebia crane hook, we can free up the crane hoist for other usage. We particularly like the fail-proof safety features that prevent the hook from opening when a lift is taking place.”

Boon, who is principally responsible for final engine assembly, explained that prior to using the elebia hooks, it took four hours to lift the engine core to the fan case. An additional 40 hours to connect other engine parts and tighten the flange bolts before tipping. And four more hours to tip the engine. Now, the engine core is lifted to the fan case and the safety hook is used only as required to detach the hoist from the engine tooling and handle the tipping operation.

…”With the elebia tool, we can free-up 16 to 20 hours additional crane capacity on our current hoist to support other lifting work. We almost purchased another crane to support our factory’s lifting requirements, an investment forecasted to exceed [Singapore] $350,000.

SATU engineers first alerted Boon of the elebia automatic hook concept early in 2016. Further to extensive research and consultation with overhead crane manufacturer, Demag, it introduced the innovation to the facility. Demag has installed a variety of lifting equipment at the facility, including a 10t/10t overhead crane, 5t jib crane and 50kg below-the-hook attachment.