How do Train Rails Work?

Elebia » How do Train Rails Work?

Train tracks are an indispensable part of train operations, as they are responsible for guiding the train along the ground. Therefore, train tracks facilitate the efficient transportation of goods and people over short and long distances.

Not only are trains among the fastest modes of land transport, but they are very safe. They are less vulnerable to disruption due to poor weather conditions, and are less likely to suffer accidents or mishaps than other types of land transport. They have also been great enablers of economic progress.

Each of the metal bars where the train wheels are placed are called train rails. Depending on its structure, we can identify different types of them.

The flat bottom rail is the most commonly used rail type worldwide. They were originally conceived in the USA, although there was a delay in production due to a lack of steel mills at the time. They have a wide base, and a head which is narrower than the base.

Flanged T rail is the name used for a flat bottom rail in the USA, and Vignoles rail is popularly used in the UK in reference to Charles Vignoles, who introduced this rail type there. They were first inserted in the London and Croydon Railway, and after it was recognised that they were much quieter than their predecessors, their popularity began to spread worldwide.

Bullhead rails used to be the most commonly used rail type in Britain. From the mid-19th century until the mid-20th century, it was standard.

Bullhead rails were a development of double-headed rails but lacked the symmetrical profile of the double-headed rail. This had the consequence that it could not be flipped over to use the foot as the head, meaning it had a short lifespan and was therefore an expensive track laying method.

This type of rail has been almost completely eliminated from the British rail network, except for some smaller branches. It has been replaced by flat bottom rails.

Conductor rails, also known as “third rails”, provide electrical power to trains or locomotives through a rigid conductor which is placed in between or alongside the rails of train tracks. They are usually completely or almost completely segregated from the outside environment, due to safety concerns with high voltages running through them.

Prominent models of rails are the 56E1, 60E2 rail profiles and 75 conductor rails. Conductor rails are used throughout the world, but in some countries such as Japan and South Korea they are being phased out due to a preference for overhead wiring in their public transportation systems.

How do train rails work?

So, how do train rails work? Tracks are made of two parallel steel rails, laid at a set distance apart. This is called a gauge. The standard distance between rails is 4 feet 8.5 in. or 1,435 mm., and are connected by railroad ties or ‘sleepers’, as they are known in Europe. These are generally made of wood or concrete. The rails, in turn, are fastened to the ties.

Underneath the train rail is the ballast, which provides a cushioning made of sand or concrete. The tracks are often raised above the ground in order to provide drainage for water removal.

Steel is easily bent into shape, permitting tracks to be curved. Rails may also have switches, which allow trains to be moved from one track to another. Finally, signals along the tracks permit train officers to stay aware of changing conditions further along the track.

How to transport train rails safely

Transporting train rails can be challenging, and safety is of the upmost importance. Cranes are used for lifting and laying the extremely heavy materials involved in laying train rails – these are often gantry cranes, which are capable of lifting some of the heaviest loads in the world.

These cranes transport older rails into storage and bring new ones into the working space. Finally, they feed the rails into a machine which lays them upon the ballast and lays them according to required spacing. In order to transport train rails safely, it is necessary to use a full-equipped crane.

A safe, functional, and modern rail clamp to facilitate the safe transportation of train rails, which operates in conjunction with cranes, is the new eTrack rail lifting clamp.

This new rail lifting system is an innovative way to transport train rails safely and securely. The new eTrack rail lifting clamp orients and positions itself directly onto the desired rail. After it has been correctly positioned, the crane descends and is able to safely retract the targeted rail. It has been proven safe for use on 56E1 and 60E2 rails, as well as 75 conductor rails. 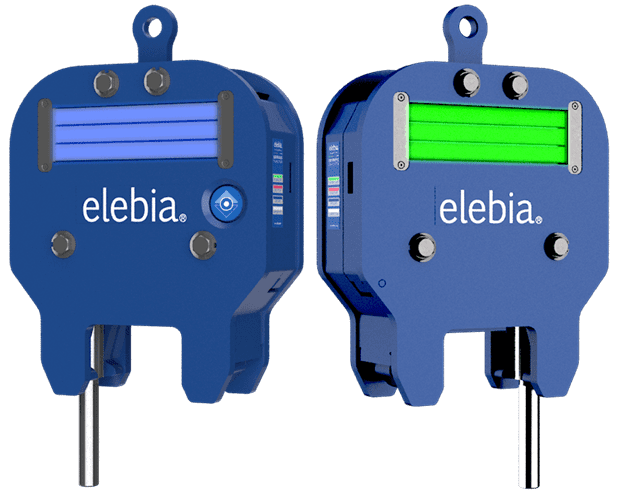 It also features an “Autoclose Mode”, which uses a sensor to detect when the device has made contact with the surface of the rail. This triggers the clamping mechanism to automatically lock onto the rail and begin raising it. The narrow profile makes it easier to approach the rails, and to position precisely onto an individual rail.

The clamp uses a rechargeable li-ion battery and is protected by a slot cover to prevent the battery from falling out of the device in the instance of high impact.

A retractable spring-loaded finger guides and orients the rail clamp to the correct position. As with the rest of our product range, it has been designed under a fail-safe design.

The eTrack rail clamp is compatible with all types of cranes.