What is plastic injection moulding?

Plastic injection moulding is the process of making a wide range of products using pellet or granular plastic resins. The resins are used to manufacture products such as airplane and automotive components, hair combs, music instruments, storage containers and thousands of other products.

This is the most preferred method due to its ability to produce enormous quantities of plastic items.

What is plastic injection moulding?

This is a manufacturing process used to produce items in large industrial volumes. It is used in mass production processes where an item is delivered thousands and thousands of times.

It is easy to produce large volumes of a specific item at a meager price, and the cost of manufacturing an item drops drastically.

There are several advantages of using this process when producing items in large masses:

In this process, all products are practically identical.

This is an effective procedure, especially when you want to maintain consistency and quality in production. The upfront cost, which mainly involves design and testing reduces since you only need to budget for one item and then produce an identical item repetitively.

Another benefit is that you can never go wrong when producing. The process starts with making sure that design is right when producing the initial product. There are many challenges involved in prototyping the first design.

In almost all cases, the prototyped items do not resemble the first product.

There is less waste in terms of scrap rate

One of the processes that produce a lot of waste is CNC machining because a substantial percentage of the plastic is cut away. Scrap rates in plastic injection moulding are produced in four areas, which are the gate locations, the sprue, overflow that leaks from the outer part of the cavity and the runners.

A sprue is a channel in the production process where molten plastic passes from nozzle to the complete injection mould tool.

This part is in a different location from the mould tool itself. There is another system called runner, which meets with the sprue. 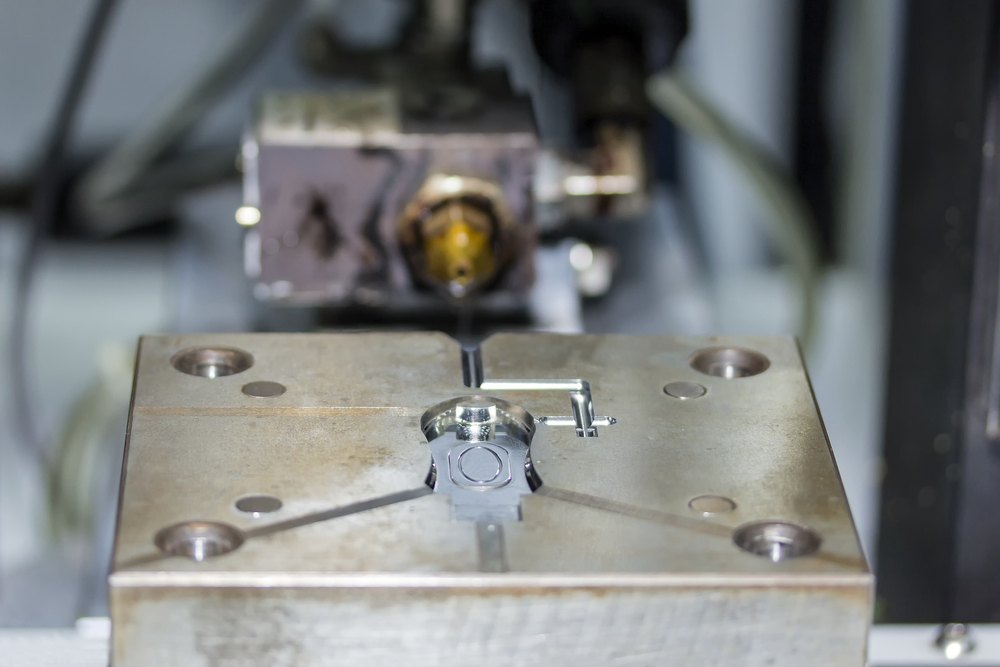 How does it work?

The plastic injection moulding process is a short and straightforward process. The first stage of the process is clamping.

Clamping and injection method involves hydraulically powered unit where aluminium or steel is moulded together before a plastic compound is introduced to the mix. When plastic compounds are introduced in the combination, they are melted using intense heat until the mix becomes molten.

When the melted plastic comes into contact with mould surfaces, it starts to solidify.

The expected shrinkage only occurs due to tremendous cooling; packaging of the compound in the injection stage allows extra material so that contraction of the melted mould does not affect the desired shape of the final item.

Once the mould solidifies, the mould is opened and pushed out as a hardened object by the machine ejection system. Rigorous force is produced by the moulding agent to eject them.

The time to open moulds and remove parts is calculated by dry cycle times, which also calculates the time needed for the finished plastic piece to drop into the container. The solid mould clamps and moves around the area of the machine where the injection takes place.

Sizing the mould into desired shapes

The main work of the clamping unit is to shape the mould into desired sizes.

How much does it cost to make a plastic injection mold?

The primary factors include complexity, part size, anticipated quantities, and material of the plastic compounds.

The material selection is another crucial factor that determines the cost of a plastic injection mould. For example, if you are producing from fiberglass, it is recommended to use a mould made of hardened tool steel since such material cause wear and tear during the process of injection using high pressure.

When choosing to manufacture large volumes of a product it’s advisable to know the various types of moulds.

How to lift and maneuver a plastic injection moulding machine

Transportation of an injected plastic mould is a daunting process. Mould builders are encouraged to advise their clients on how to handle injected moulds from the manufacturing process to the production area and to storage.

The mould should be checked before being put into storage. After maintenance, a safety check is conducted before the mould is transported.

The best solution when lifting and manoeuvring plastic moulds from one point to another is the use of the elebia lifting hooks and automatic hooks, basically thanks to the fact that the load can be engaged and released remotely. There is no need for an operator to climb up and down the mould and no handling is necessary to release the hook. The whole process is simply safer! Get a clearer view of the lifting and transporting processes with the two below videos.