Meet the Biggest Machines in the World

Elebia » Meet the Biggest Machines in the World

Biggest Machines in the World

It may seem that the modern era is characterised by a drive towards nanotechnology. Making gadgets so small that they can fit on a fingertip, or even inside human veins. Nevertheless, it is important to note that in the modern day, technology is also getting bigger. You might be surprised by the sheer scale of some of the biggest machines in the world. As well as by their power and by the amazing things that they can achieve.

The Biggest Machine in the World? Meet the LHC

The machine that currently holds the title of the world’s largest is the Large Hadron Collider (LHC) at CERN in Switzerland. It is responsible for discovering the Higgs boson (also known somewhat more dramatically as ‘The God Particle’). This huge structure, buried 574 metres below the ground, has a circumference of 17 miles. Before the high energy beams used in the LHC were switched on, the scientists who worked there used bicycles to travel from one end of the machine to the next. Will the LHC retain its title for long, though? There are rumours that scientists and engineers are now planning to build an even larger particle accelerator that will be three times the size of the Large Hadron Collider. Perhaps they should get ready to trade those pedal bikes in for motorbikes.

Some of the world’s other biggest machines: the Bagger excavators

This monster machine was created by the German company Krupp, and it was created in order to excavate the Tagebau Hambach coal mine that lies in the west of Germany. It took just 13 years for the Bagger 288 excavator to remove all of the coal from this mine, and this is no surprise as this machine is able to excavate enough coal per day to fill up 25, 000 railway carriages. Once the job was finished, the Bagger 288 was moved to a nearby mine, Garzweil. Garzweil is located just 14 km away from the Tagebau Hambach mine, and yet it took three weeks for the Bagger 288 (which maxes out at a top speed of 10 km/h) to complete this journey. It seems that, at the moment at last, size and speed do not go hand in hand.

In 1995, the Bagger 288 was dwarfed by a new model, the Bagger 293, which stood at 215 metres tall. It was said that the Bagger 293 was another huge, unwieldy beast that was so large that it often scooped up whole bulldozers without realising if they got in its way. One can only imagine what a Bagger 300 might look like. It seems that excavation is the field in which most true giants of machinery arise, as other machines that have earned the accolade of being some of the world’s largest include the Bulldozer D575A-3SD and the 57 ft tunnel boring machine known as Bertha, which was built for the Washington State Department. Need a super truck to get rid of all of that excavated material? Try the biggest truck in the world, the Liebherr t 282b which is 24 ft high and weighs 261 tonnes.

We’ve already heard about the Liebherr t 282b, but this is not the only machine designed for transportation that has reached massive size. The biggest ship in the world is the MSC Oscar which was christened in 2015 and has a capacity of 19,224 TEU. At 458.45 m, the Supertanker Seawise Giant is the longest ship ever built. The biggest aircraft carrier is the Antonov An-225 Myria. This is also the world’s heaviest ever aircraft, weighing in at 710 short tonnes. While we’re talking of transport, meanwhile, check out the F60 Conveyor Bridge, which is the world’s largest movable machine and which was designed to transport coal from German coalfields. 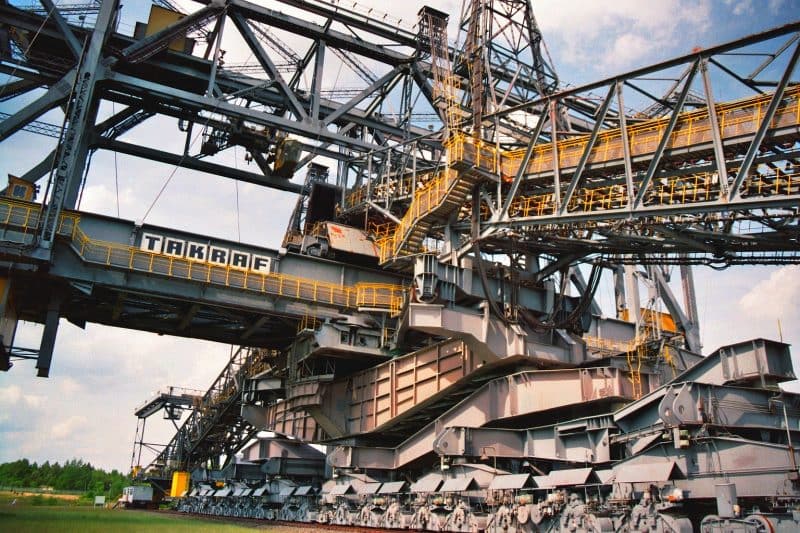 Probably one of the most bizarre biggest machines in the world, ‘La Princesse’ is a huge mechanical spider created by the city of Liverpool to parade through their streets. Why La Princesse was created is anyone’s guess, but she is absolutely huge. Her legs span 5 stories and she weighs 37 tonnes. Standing at 50 feet high she is most definitely the stuff of nightmares for arachnophobics. La Princesse does not move by herself, however. Twelve skilled operators are needed to move her. On her debut outing, La Princesse emerged from Salthouse Dock before clambering up the side of a derelict building, to the awe of the huge crowds gathered below.